Main antagonist of Alma until Kenmi reveals his intentions. He is the same being as Alma except that he overuses his power which causes his condition that can be treated with a vaccine. He can alter objects around him and uses his swords to turn other things into Darkstones. He truly want to be free even if he has to fight the Aiba Foundation for it. He has a huge grudge against his former superior, Kenmi. He considers Alma as a higher class than himself. His companion, Fei, takes care of him. He needs the vaccine to retain his mind so that he won't turn to a Darkstone.

Knight is a male of average height with reddish eyes that has a hint of pink with red hair. He usually wears only a black coat with white straps and a pair of pants that are around the same color as his hair.

After the battle with Kenmi, Knight wears the same kind of coat he has but instead of a black coloration, its white.

He seems to be a little bit light headed when he isn't worrying about his freedom as evidence of the end of episode 12 after when they are done dealing with Kenmi where both Fei and Knight were standing on a tall building in the middle of winter. Knight still wears his usual attire of a coat with no shirt on top and only a pair of pants on the bottom, and he just realizes that it is cold.

Like Fei and Hon, he was one of three children that were experimented on that had the Sacred Seven ability, he managed to escape from the facility with Fei before the start of the series.

His most used abilities are

When Kenmi stripped Knight of his Darkstone powers, Aoi volunteered to awaken his True Form. Like Alma, he has access to all Seven powers. Not that much different excepted that his color scheme is white and blue instead of the original pink and dark blue and that his false wings transform into angel wings. 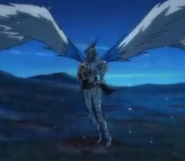 Knight, in his True Form, saves Fei from becoming a full Darkstone.

Fei- They apparently have a close relationship as Fei constantly worries about knight when ever he goes out, and Knight tries to make sure Fei is not in any danger.

His name could be spelled as Naito, but this could be based off of the pronunciation of his name rather than the actual spelling of it.

Community content is available under CC-BY-SA unless otherwise noted.