Makoto Kagami is Ruri Aiba's personal butler and field commander for the Aiba Foundation. At 18, he graduated from Harvard and is enrolled in Alma Tandouji's school for his convenience. He became class president when he enrolled. He has his own personal mech to fight Darkstones.

Makoto is a handsome young man with an average height. He has short black hair that has unusually long bangs and dark red eyes. He is usually seen in a butlers uniform, but while at school, he wears a student uniform and also wears glasses.

Most of the time, Makoto is a serious person.

Very little is known about Makoto's past. However, a short flashback indicates that he has been with the Aiba family ever since he, Ruri Aiba and Aoi Aiba were young children. At this time, he was still their butler.

Unlike most of the main characters that are seen fighting, Makoto uses a personal Anti-Darkstone combat robot suit, which, for the most part, proves mostly ineffective against large Darkstones; while it can defeat Knight's serpents, it can only partially damage a darkstone of approximately the same size as the said suit.

The suit is equipped with the following weapons:

The mech has the ability to purge limbs and external equipment, and Kagami generally purges damaged parts rather than continuing to use them. If the head, which contains the primary sensor array, is damaged, it and a portion of the chest can be purged to allow the pilot to personally view his surroundings.

One of the more iconic abilities of the Engagement Suit is its vehicle form; in this form, it resembles a cross between a small tank and a race car, and can move faster and has a reduced target profile. However, as none of the weapons mounted on the suit are turrets, this form lacks the ability to effectively track moving targets.

Outside the suit, Kagami also possesses skill in at least one unspecified martial art.

Ruri Aiba - As her butler, Makoto is very loyal to her, there are some hints in the anime that he might have feelings for her. It is obvious that Makoto feels very responsible for her safety as shown when she is lost in the stone worshiping pyramid and further when she is kidnapped by Knight.

Aoi Aiba - As her butler, Makoto is as loyal to Aoi as he is to Ruri. Aoi might have feelings for him as in the last episode in the ending seen, she is shown to be clinging onto his arm while she is introducing herself as Ruri's younger sister.

Alma Tandouji - Over time, Makoto seems to place a large amount of trust in him as only Alma has the power to protect Ruri from the Darkstones. However, they are well known for their continuous squabbling especially concerning the health and well being of Ruri as Makoto places her protection above everything else, something he doesn't fully trust Alma to do. 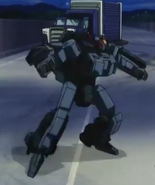 Engagement suit battle mode
Add a photo to this gallery
Retrieved from "https://sacredseven.fandom.com/wiki/Makoto_Kagami?oldid=4752"
Community content is available under CC-BY-SA unless otherwise noted.